While everyone else OD’s on the Fred Thompson will-he-or-won’t-he hype, Fishwrap is excited by the news that former Rep. Cynthia McKinney, Georgia Democrat, may seek the Green Party nomination.

She was interviewed Friday on New York radio station WBAI:

You know, I have on my kitchen table, I have a button that was printed in 2000. And it was printed by the Green Party, they were talking about me running as a Green. So I have had a very long relationship with the Green Party. And I think, honestly, with the failure of the Democratic majority in Congress to repeal the PATRIOT Act, to repeal the Secret Evidence Act, to repeal the Military Tribunals Act, to not institute immediately actions of impeachment against this illegitimate, illegal and immoral administration, stop the war, I have to seriously question my relationship with the Democratic Party. I know that the very learned listeners of WBAI have long been interested in how to have a truly independent voice. I understand now that with the current Democratic majority in Congress that’s not possible. ….

So, you know, 2008 has not been ruled out, some kind of effort. Certainly now it is questionable as to whether that effort would come under the banner of the Democratic Party. There’s no way that with the current crop of candidates who are all supporting a military action against Iran and who none of them support impeachment. They can not speak for me any longer.

Heck, from the way her platform would sound, I think she’d garner tons of support with the Democratic base and as a result, she might get as much attention as Cindy Sheehan did, except over a longer period of time, and the entire country could really get an up close and personal look at how far the left has fallen over the cliff. She’s also got friends in low places with a few credibility issues, like noted Socialism-lover Danny Glover: 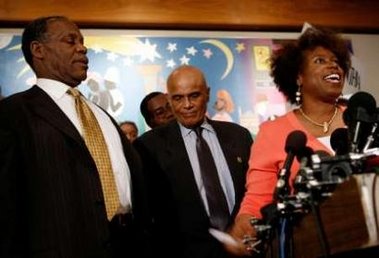