Senator Clinton, as do so many other Democrats, appears to believe that her criticisms of the mission in Iraq should be done with impunity. Case in point:

[Mrs.] Clinton, D-N.Y., a member of the Senate Armed Services Committee, has since May requested a briefing from Pentagon officials as to whether they have undertaken any serious planning for a future withdrawal of U.S. troops from Iraq.

On Thursday she received a response from the Pentagon that she told ABC News was “outrageous and offensive.”

The letter from Undersecretary of Defense for Policy Eric Edelman did not mince words. “Premature and public discussion of the withdrawal of U.S. forces from Iraq reinforces enemy propaganda that the United States will abandon its allies,” he wrote.

“I deeply resent the administration’s continuing effort to impugn the patriotism of those of us who are asking hard questions,” Clinton told ABC News.

Here was what got La Clinton so uptight:

Premature and public discussion of the withdrawal of U.S. forces from Iraq reinforces enemy propaganda that the United States will abandon its allies, much as we are perceived to have done in Vietnam, Lebanon, and Somalia. Such talk understandably unnerves the very same Iraqi allies we are asking to assume enormous personal risks in order to achieve compromises on national reconciliation, amending the Iraqi constitution, and other contentious issues. Fear of a precipitate U.S. withdrawal also exacerbates sectarian trends in Iraqi politics as factions become more concerned with achieving short-term tactical advantages rather than reaching the long-term agreements necessary for a stable and secure Iraq.

Taranto nails it here in response to Hillary’s complaint:

There’s not a word in there (or anywhere else in the letter) about Mrs. Clinton’s patriotism or lack thereof. Edelman only argues that it is harmful for politicians to make public demands for early withdrawal because such demands tend to embolden the enemy. He is making a claim about the wisdom and likely consequences of her actions, not about her motives.

In the early days of the Cold War, before liberal Democrats decided to bug out of Vietnam, there was an adage that “politics ends at the water’s edge”–that America’s political parties, whatever their differences on domestic policy, were obliged to present a united front to the outside world.

Today’s liberal Democrats would invert this principle. They assert the moral right not only to undermine U.S. foreign policy but to do so with impunity–that is, they wish to be immune from criticism for their statements and actions.

Indeed, but as we all know, Democrats routinely try and shut down debate by thinking, as Taranto suggested, that they should be immune from criticisms about what they’ve said regarding the war in Iraq, but they also do so by claiming the badge of “absolute moral authority” via using people like Cindy Sheehan to ‘get their message across about the war’ because Democrats know that the first time any Republican comes out and criticizes someone who is supposed to have AMA, the press is going to skewer them, and make them out to be cold-hearted. Democrats have figured out that in many cases, it’s best not to deliver the message personally themselves, but instead have AMA’rs (proxies) deliver it instead, and then afterwards either claim ‘distance’ from the speaker of the words or claim that the deliverer of the message speaks for ‘many American people’ with his/her comments, thus legitimizing comments that should be considered ridiculous and/or outrageous.

But back to Taranto’s comments about Edelman not questioning Clinton’s patriotism, I don’t think he was either, but so what if he was? Back in February this year, I wrote about the Democrats and their complaints about questions on their patriotism, and it still holds true today:

I’ve posted at this blog before that this is a typical lefty tactic when it comes to discussing anything related to our national security. If a Dem advocates it, and a Republican criticizes it, the criticism in and of itself – without examining whether or not it has merit – is automatically characterized as ‘questioning patriotism.’ It’s a way the left attempts to stifle debate, by trying to make Republicans too fearful of criticizing what the Dems are advocating.

I think the issue of ‘questioning patriotism’ is overblown by the left. Now, some of their complaints are valid. Thoughtful criticism of the admin’s WOT policies in and of itself is not unpatriotic and shouldn’t be labelled as such, but sometimes it is. No one is every going to agree with every single thing the administration has advocated with respect to the WOT, and that’s something we need to keep in mind when judging criticisms made by the left (and some on the right) towards the admin’s WOT policies.

That said, sometimes it is entirely appropriate to question patriotism: like over Rep. John Murtha’s wish for a ‘slow bleed’ strategy that would choke off funds to our military to the point the President had no choice to withdraw from Iraq. I can, have, and will question his patriotism on that. When Democrats pass wussified ‘non-binding’ measures designed to ‘show opposition’ to the President’s surge plan without putting their money with their mouths are. That’s a good reason to question patriotism, because clearly they’re putting politics ahead of what they think is best their country. If they weren’t, they’d pass a binding resolution. But they figure a binding resolution would be political suicide. And when sitting a sitting US Senator visits an ally of Iraq in January 2002 and alerts a high-ranking official there that he believes the US is planning on attacking Iraq. Well, I don’t think that is patriotic, either.

Hillary Clinton has many times accused the President of lying to the American people about the war in Iraq, and has played politics with this war from day one, when she voted in favor of the authorization for the use of force. She’s playing politics with it now, in an attempt to appease the far left flank in her party, because she wants to keep her poll numbers high. She deserves to have her patriotism questioned, and if that’s what Edelman was doing, he shouldn’t feel guilty about it. Something tells me from just reading what he had to say to the Senator, that he’s not the type of guy who feels guilty about saying exactly what’s on his mind.

Read related thoughts on this via Mark Finkelstein at Newsbusters, who points to an interesting exchange between feminista Naomi Wolf and solid conservative Melanie Morgan, on the issue of questioning the patriotism of people who criticize the admin.

While on the subject of Hillary, I couldn’t help but notice this article from the Washington Post’s Robin Givhan on Hillary’s supposed newfound use of cleavage:

There was cleavage on display Wednesday afternoon on C-SPAN2. It belonged to Sen. Hillary Clinton.

She was talking on the Senate floor about the burdensome cost of higher education. She was wearing a rose-colored blazer over a black top. The neckline sat low on her chest and had a subtle V-shape. The cleavage registered after only a quick glance. No scrunch-faced scrutiny was necessary. There wasn’t an unseemly amount of cleavage showing, but there it was. Undeniable.

It was startling to see that small acknowledgment of sexuality and femininity peeking out of the conservative — aesthetically speaking — environment of Congress. After all, it wasn’t until the early ’90s that women were even allowed to wear pants on the Senate floor. It was even more surprising to note that it was coming from Clinton, someone who has been so publicly ambivalent about style, image and the burdens of both.

In the context of world events, Givhan’s article is meaingless. I mean, who cares about Hillary Clinton’s cleavage? I sure as hell don’t – and if any comments I’ve seen made about her from men are any indication, most men don’t care about it, either (at least not hers, anyway) but part of politics involves ‘image’ (as Red State reminds us with the flashback about the Al Gore “package” Rolling Stone pic) so of course it’s no surprise that we’re hearing about what Hillary is up to on the fashion front. I myself had noticed this slight image change Hillary was undergoing a couple of weeks ago, in this July 3 pic: 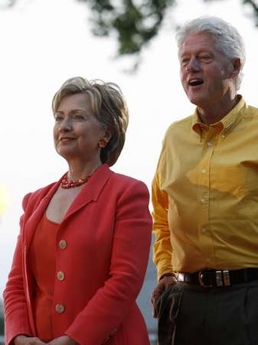 Compare that to this picture, which is typical of Hillary’s more buttoned up style:

From a woman’s standpoint, I think it’s pretty clear that La Clinton is consulting with fashion experts, because she looks a lot softer in the picture with her husband than she looks in the above picture, and the pictures you see at the Google links. I’m not surprised that she’s trying to soften her look, as she’s obviously trying to win over more women voters, and gain more traction with male voters, and at the same time don’t have an issue discussing this because it’s all part of Hillary’s attempt at transforming herself into someone she’s not: someone who is soft and feminine on the outside, but tough as nails on the inside. She’s part of that, anyway, and I’m sure you can determine which part isn’t true. Again, think Al Gore and Naomi Wolf, the latter of who, as noted earlier, was taken to task by Melanie Phillips on another issue related to Hillary Clinton.

I laughed when I saw some of the predictable reactions from some of the lefty blogosphere’s more vocal feminists, who are pretty ticked off that Givhan had the audacity to comment on Hillary’s cleavage, because, supposedly, they’re aghast that one woman would judge another woman on the basis of her looks rather than her abilities. While I’m no defender of Givhan, who wrote a nasty little piece on Chief Justice John Roberts’ wife and kids and their attire in July of 2005, I can’t help but remind certain ‘outraged’ NOW-types how feminist lefties don’t mind using their breasts to their advantage when they believe the occasion calls for it. So assuming that Hillary really is trying to show some cleavage (rather than just going softer with better colors and styles), I’m not quite following where the ‘outrage’ is coming from and instead once again smell the powerful stench of hypocrisy coming from the typical BDS-induced/man-hating quarters.

Update: Oh man – I shouldn’t laugh at this (scroll) but I couldn’t help myself, all things considered.

Flashback: The International Herald Tribune wrote about Hillary’s attempt at an image change back in March (which I noted here).