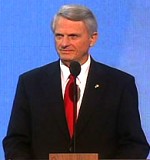 Ok, since I have taken a walk down memory lane in my prior post by linking up to Senator Zell Miller’s challenging Chris Matthews to a duel during the 2004 Republican National Convention, I just had to bring up the speech he made to the convention that year as well. It’s the one speech from the 2004 RNC that got me fired up and motivated more than any other.

For any frustrated Republican out there who is thinking about sitting at home during the 2006 elections, I urge you to reconsider – Zell’s speech might be two years old, but what he says in it about Democrats holds true now more than ever. One of the key points he made in the speech was that Democrats see America as the problem, not the solution. Another key point he made in the video is that the Dems seem to have this obsession with bringing down the President in a time of war. We all know this is true, and if given the chance, that’s exactly what they’ll do. Today’s Congressional Dems view the President as the bigger enemy than Al Qaeda. We know this because they spend more time fighting him rather than offering up any coherent policy ideas that might contribute to defeating Islamofascism.

What’s just as appalling about Congressional Democrats is their recent endorsement of what equates to Demofascism by threatening to suspend the broadcast license of ABC if they don’t ‘revise or pull’ the docudrama “Path to 9-11“, which is reportedly very critical of how the Clinton adminstration handled the rising threat of OBL and AQ. These same Democrats didn’t give a damn about the gross factual inaccuracies of Democratic darling Michael Moore’s crockumentary “Fahrenheit 9/11”, but all of a sudden complain about supposed inaccuracies in “Path to 9-11” that don’t really exist.

Anyway, if you’re so inclined, make sure to read (or re-read) the text of Miller’s speech I provided in the opening paragrap. Better still, watch the video – it’s about fifteen minutes long (audio here). There’s something to be said for listening and learning from an older Southern man (or woman, for that matter) who sounds like he’s preaching from the pulpit

. And Zell, for any of you who watched that speech like I did, gave a barnburner of a speech. Here’s a snippet:

Today, at the same time young Americans are dying in the sands of Iraq and the mountains of Afghanistan, our nation is being torn apart and made weaker because of the Democrats’ manic obsession to bring down our commander in chief.

What has happened to the party I’ve spent my life working in? I can remember when Democrats believed that it was the duty of America to fight for freedom over tyranny. It was Democratic President Harry Truman who pushed the Red Army out of Iran, who came to the aid of Greece when Communists threatened to overthrow it, who stared down the Soviet blockade of West Berlin by flying in supplies and saving the city.

Time after time in our history, in the face of great danger, Democrats and Republicans worked together to ensure that freedom would not falter.

No one should dare to even think about being the commander in chief of this country if he doesn’t believe with all his heart that our soldiers are liberators abroad and defenders of freedom at home.

But don’t waste your breath telling that to the leaders of my party today. In their warped way of thinking, America is the problem, not the solution. They don’t believe there is any real danger in the world except that which America brings upon itself through our clumsy and misguided foreign policy.

7 Responses to "Zell Miller flashback video number two: what Democrats are about today"